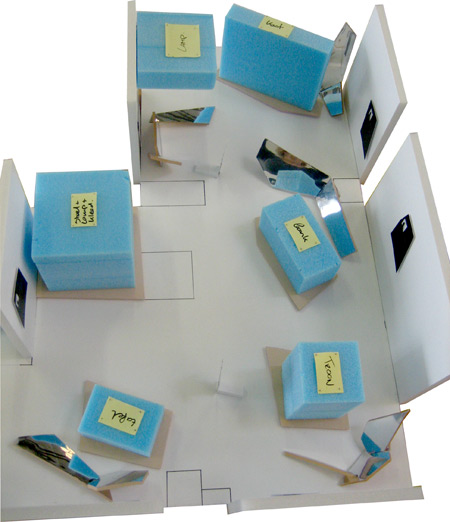 Only one week to go and Salone del Mobile will take place in Milan. Last weeks we have been working on a presentation for Lebesque. They will present six pieces of furniture in Zona Tortona. Here you see some of the sketch ideas and shapes for the room. 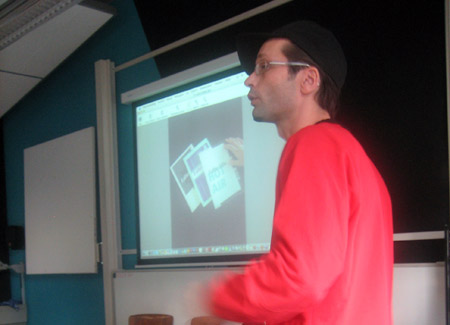 After a presentation about Edhv at the “Willem de Koning” Academy by Remco van de Craats, the student were given some old school homework. The assignment was to make a poster of the title from a given Hip hop track from the late eighties. There were some restrictions. It was not allowed to use an existing typeface. If an image was to be used it had to be self made. The mission was to save the hip hop culture from it’s clichés.

Here are some of the result of the lecture at the Willem De Koning Academy in Rotterdam. The results were surprisingly diverse. From very typographic (like this one by Aernout Tas – Special Ed -I Got It Made ) to very poetic. Sorry about the bad quality of some pictures (to the students, please send better pictures). After evaluating the results we watched the original videos of the songs and some other facts that surfaced during their little research about the artists 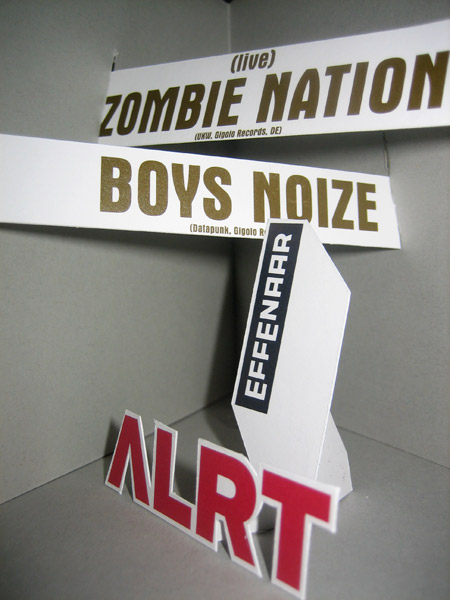 A new season for ALRT at the Effenaar. Another 6 editions. We created a new way of dealing with the promotional campaign. Here you can see some of the sketches and tests made for the posters and flyers. Everything is cut out by hand in order to give it the analog feel. So keep an eye out for the final posters and flyers. They will be up soon. 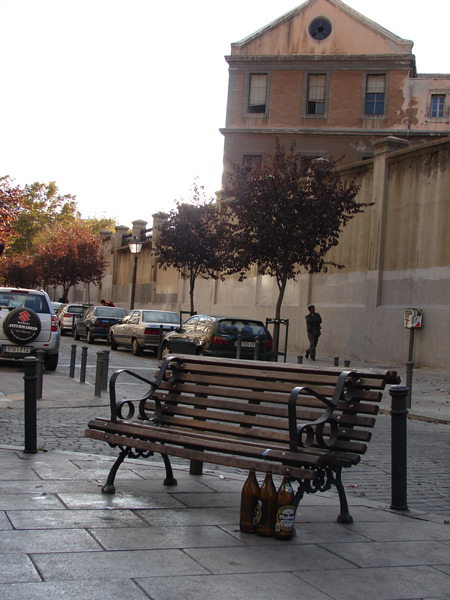 We are in Madrid for the next issue: Edhv/Mdrd.
It’s going to take three days of painstaking labor to get the job done. But hey, somebody’s got to do it.

The Mdrd taskforce consisting of: Daan Melis, Kim Hemmes, Bart Haans, Jeroen braspenning, Sjoerd Koopmans, Lenneke Heeren, Raffaela Vandermühlen and Remco van de Craats, Went to Madrid to try and capture the city with pen and paper. The weather was nice but in the shadow it was freezing cold. After a few hours it was impossible to draw because our hands were to cold.

On Sunday evening we put all our drawings together. We planned to make a giant collage with them but there was something missing. Then, after some discussions and rethinking we came up with the plan to use a backlight and use the shine through effect of the paper to give it a misty dimension. It turned the drawings into a kind of animation of follow-up images. 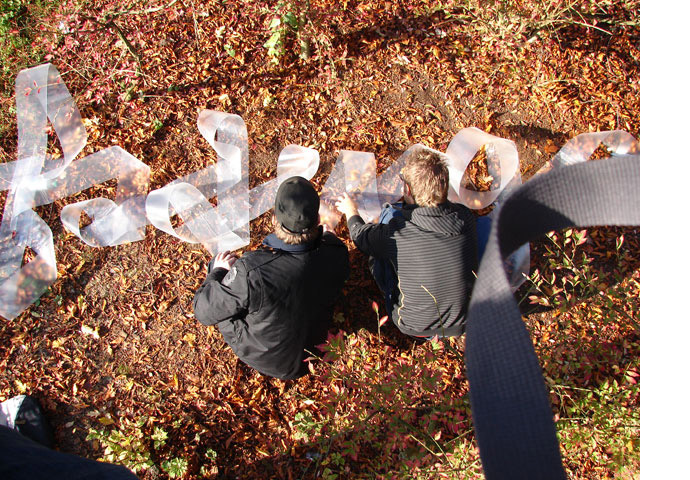 During the DDW we participated in a type workshop by Underware. Together with people from Spain, Germany, Italia, Japan, we experimented 1 day with materials available on roles like tape, paper, foil, etc. The second day we had to apply the type on a location somewhere in the city.
The results and approaches were surprisingly diverse. 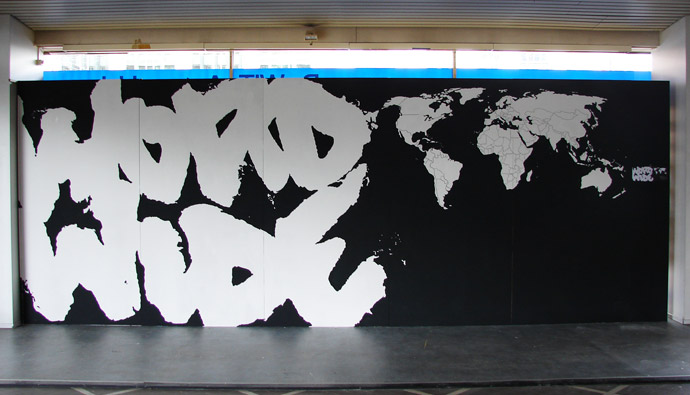 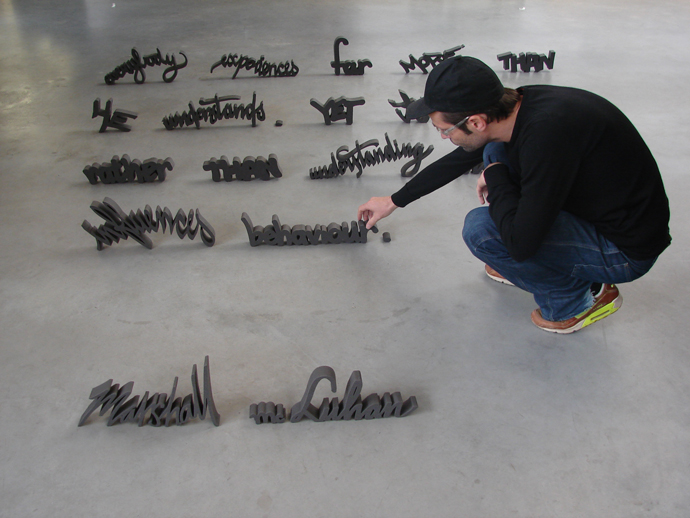 During the Dutch Design Week in Eindhoven we take part in an exhibition which takes place in an old garage in the centre of Eindhoven. Together with Hell Shop, Onnomatopee, Roots, Greytones, Daily Whatever.

We created a wall for our Wordwide project on which we painted the world and marked al the locations where we sent our words. Next to that we hang al the pictures we have received so far. Every day we update the wall so by the end of the week the quote will be readable again. 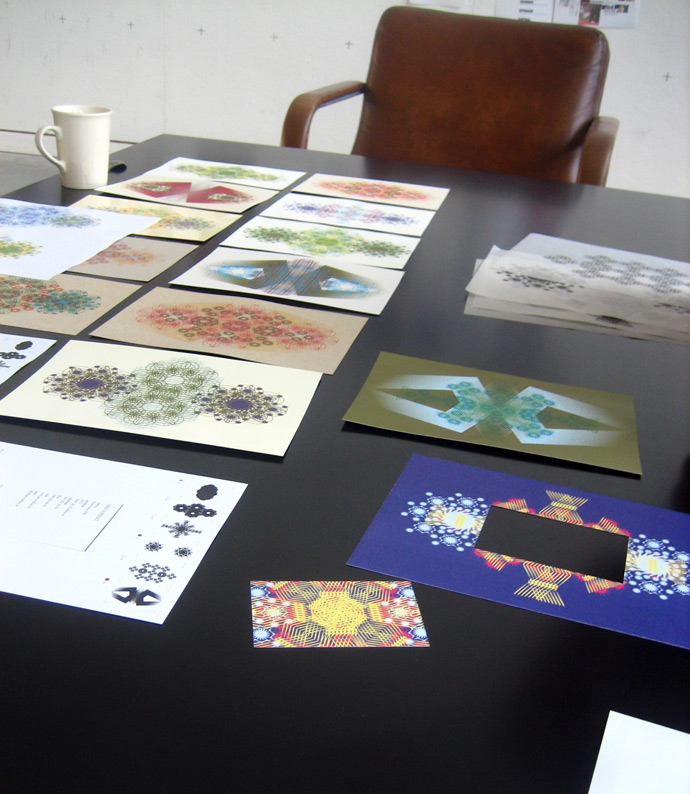 What you see here are the proposals for a Greve Offset promotional card. Basically we created 6 different graphic patterns which will be printed in different order allowing it to be a highly variable graphic in terms of colors and materials used. In this way we can use it to show the craftsmanship of the printing profession.

These are just the proposals. We will recreate the graphic patterns by hand so it will have a more organic flow to it. 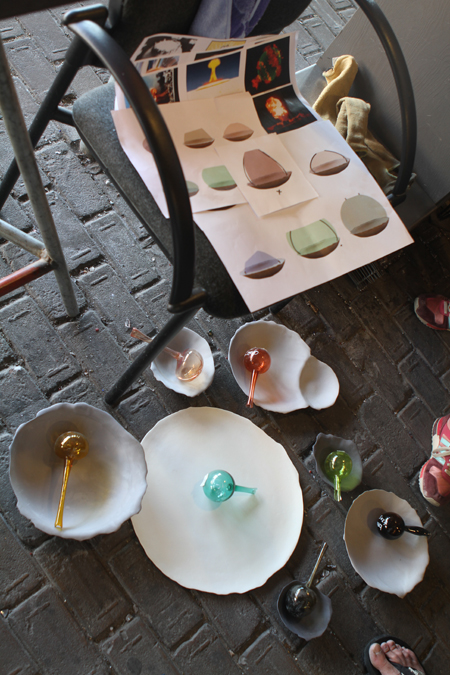 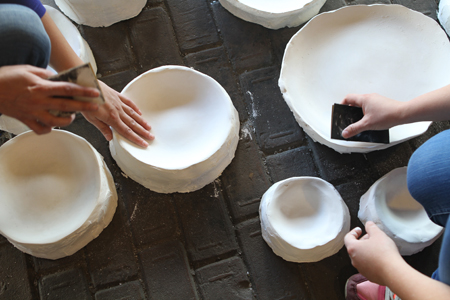 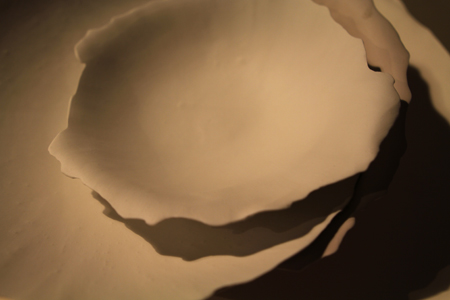 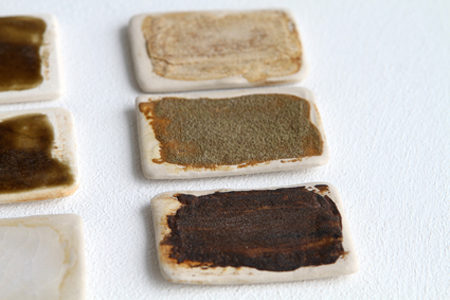 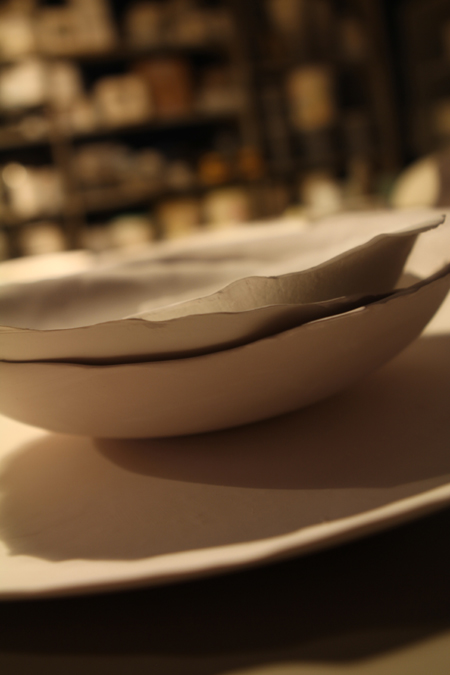 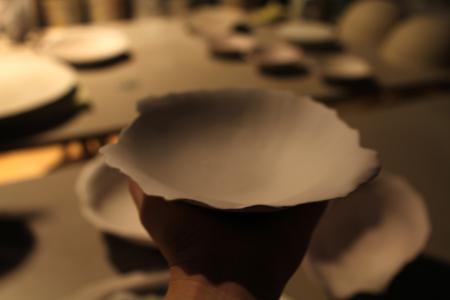 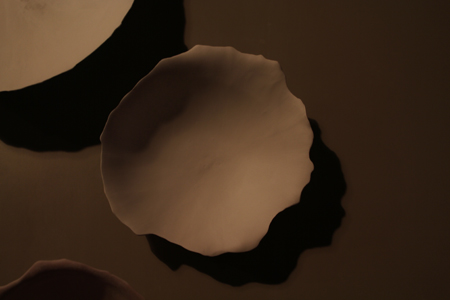 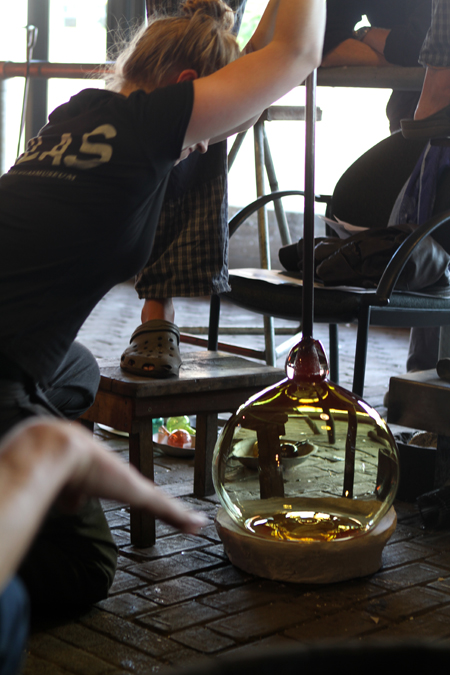 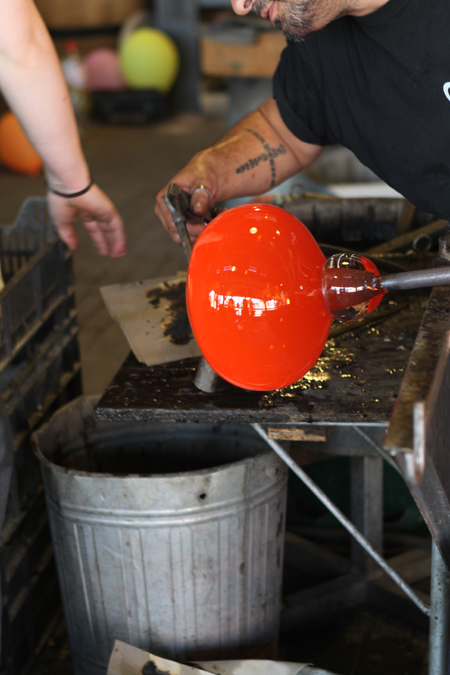 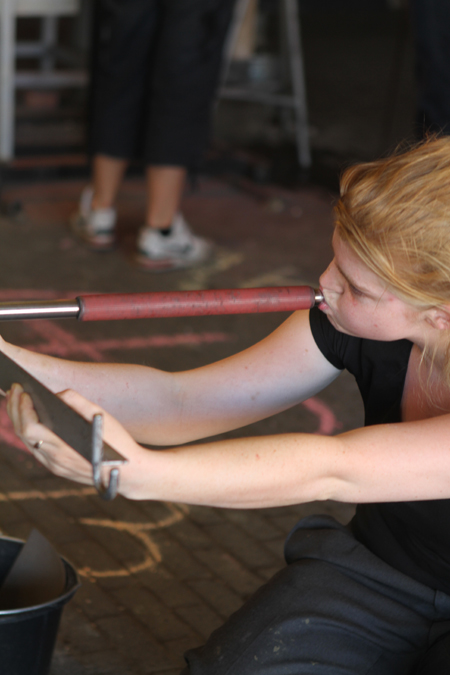 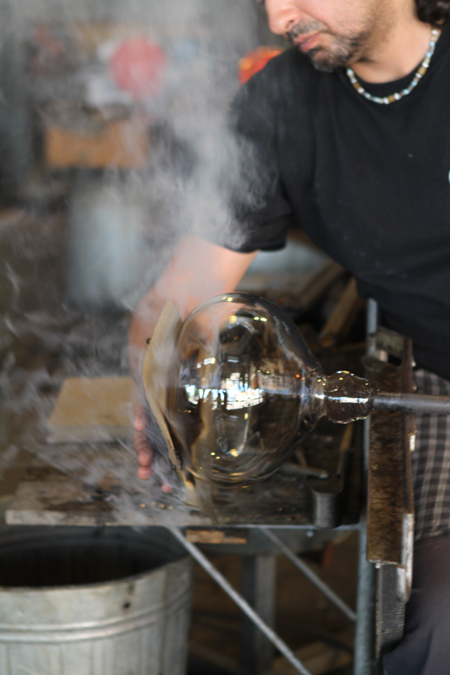 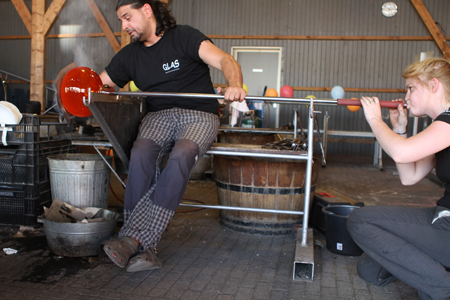 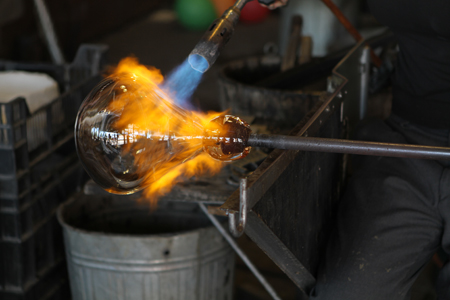 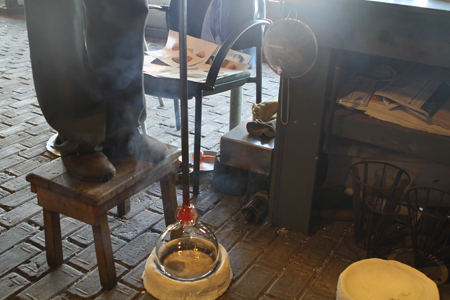 First tests of our Moon Life Tableware. Based on the energy of an impact. This is the ceramic part. next up is the glass part. The pieces will be on show in the Moon Life Concept Store in Shanghai.

Last weekend we went out to do the glass part of the Moon Life project. Blowing glass is a amazing thing to do. Super hot stuff. It takes a few days to cool down so the results will be visible soon. 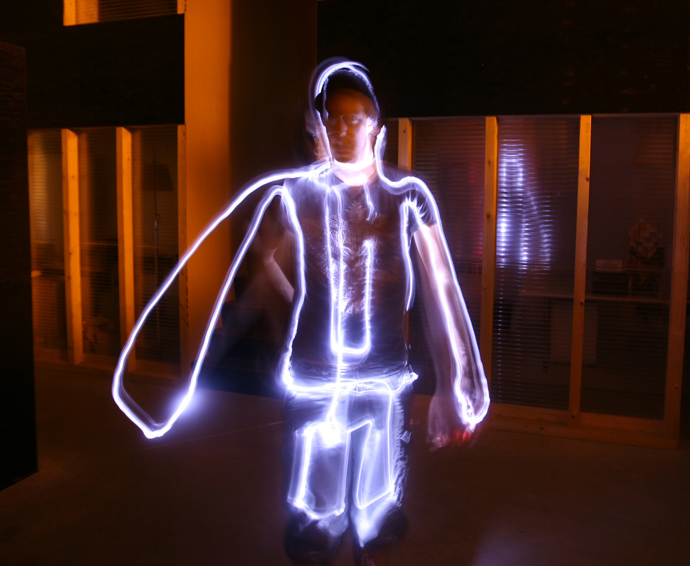 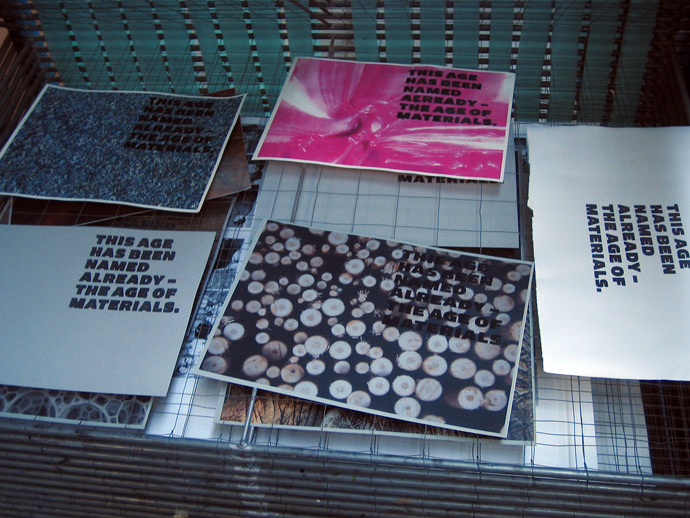 Here we are silkscreen printing and experimenting with a special ink to make a book cover. The ink is developed by Ruben Esser for his graduation project at the design academy. The ink “grows” when it’s heated and becomes a rubber, foam-like material.